Strategic plans probably fail more often than they succeed.  Perhaps the most prevalent reason is the practice of starting from the numbers and working backward toward strategy, a tendency common to financially driven companies that set their goals for revenue and earnings growth then cast about for a strategy to underwrite those goals.

This approach fairly abrogates the integrity of strategic planning.  It is tantamount to a military general saying to commandants, “We can afford to lose 15% of our troops; what kind of battle strategy will that buy?”  In that context, the proposition seems absurd but in corporate practice it is common.  “What strategy will achieve an 8% growth in earnings next year?”  But, in so doing, was a strategy discarded that would produce little increase in earnings for two years but 15% for the five following?

David Collis, who was cited in an earlier blog post for his seminal Harvard Business Review article, Can You Say What Your Strategy Is? (April 2008), cites three dimensions to a successful strategy.  The first is objective.  As Professor Collis puts it, what end is the strategy designed to achieve?  In the case of A to Z, it was to become Oregon’s leading high quality value wine brand.  Seems simple enough.  However, that could mean a number of things.  In what categories would we compete?  From what regions?  Where would we sell?  Into what channels?

While at the time, the objective was a largely untapped opportunity, how we defined the scope of how we would compete (Collis’ second dimension) was critical to the success or failure of the objective.  The categories of Pinot Noir and Pinot Gris were fairly defined for us as the state’s flagship varietals.  However, when we tried to extend the scope of the brand to produce big reds from Southern Oregon, we met considerable resistance.  Our brand was not sufficient to leverage even excellent wine from a relatively obscure region into a highly competitive global segment.

Similarly, we faced a scope decision of where and how we would sell.  Seeing that over 40% of wine produced in Oregon was sold in Oregon and that relentless distributor consolidation would only circumscribe national opportunities further, we opted for something of an inverted market strategy where we worked from the outside in, developing national markets before the home market.  By broadening channel scope from the outset, we hoped to stay ahead of the curve of consolidation.  Conversely, with respect to international sales, we only enter markets that are “transparent”, i.e. where we can compete without a direct and costly presence.  Thus, looked at concentrically, we defined the optimal channel scope for our resources to lie in the middle rings so to speak.

Resources is the keyword and third dimension of Collis’ structure.  The most unique objective and focused scope are academic if the company lacks the necessary resources or competitive advantage to achieve them.  This is the second common failure of strategic planning—the most creative strategy will inevitably fail if its execution is impracticable.  While maintaining a limited market presence, home grocery delivery with the associated objective and scope of time-saving for over-extended individuals and families seems at first glance an extension of other home delivery services past and present such as milk delivery and dry cleaning.  However, there was no competitive advantage as what was overlooked is that milk delivery and dry cleaning services are largely undifferentiated while a large share of grocery purchases and meal planning is done in the store.  Few grocery lists account for all that is purchased.  Moreover, the paper-thin margins of grocery could not support the weight of delivery service.

Disney wrongly assumed that the American love of Disneyland was ubiquitous and would be embraced in France with the same cultural curiosity as Levis and McDonald’s.  What was overlooked is that Levis and McDonald’s were whimsical tastes of American culture (with McDonald’s going so far as to architecturally integrate its stores into surrounding cityscape) whereas Euro Disney was a sprawling American occupying force overrunning and profaning French culture and sensibility.

Frequently, strategic failure is simply a combination of errant scope and the loss of competitive advantage.  One of the most glaring failures was the introduction of New Coke in the early 80’s when Pepsi claimed that younger drinkers preferred Pepsi’s sweeter taste.  Wanting to broaden its appeal to a younger demographic (scope), Coke bit, and was bitten.  The traditional Coke taste was its most important asset and without it, New Coke was just another new product introduction.

In 1989, Ford bought Jaguar, thinking that it would extend its product line into ultra-luxury automobiles.  The strategy never succeeded for two related reasons.  One was that in the U.S., Ford was indelibly identified as a producer of American cars; you were a Ford man, A GM man or a Chrysler man.  The second was that despite the limited market for Lincoln, Jaguar was a great leap beyond.  People weren’t interested in buying a $75K Ford.  In other words, Ford did not have the marketing resources to compete in the ultra-luxury segment.  Since selling Jaguar in 2007, Ford has masterfully returned to its American roots, selling durability and reliability, traits that had comprised its competitive advantage.  The company has been so successful in building on this advantage that, ironically, it is now selling $75K pickup trucks.

Occasionally, there are marketing coups where in giving up one segment, a company attracts an even larger one.  Pabst Blue Ribbon had been known for decades as a workingman’s beer since its founding in the 19th century.  Its sales peaked in 1977 and then began a long decline.  When the efforts to regain its consumer base failed, Pabst rebranded itself as PBR and marketed blue collar “authenticity” to the hipster crowd with fair success.

Nevertheless, it is a risky strategy and is best undertaken as a last resort.  Virtually no company is big enough to strategically control industries or to redirect markets.  Google is a rare exception.  Ford, IBM, Sony, Microsoft, Apple and many others have all failed in their times.  Fundamental to successful strategy is the ability to adapt to evolving technology, competitive changes, alterations in consumer desires or behavior, channel shifts, supply reconfigurations or regulatory conditions.  This may mean compromising opportunities to avoid an unmanageable risk of unexpected outcomes.

Many years ago, a man I knew was talking about why he didn’t expand his stock brokerage business into other products such as bonds or into other markets.  He replied that while he believed that he knew as much about stocks as anyone, he knew little about bonds.  As to markets, he further knew that people chose a small brokerage for the personal relationship and that to expand to distant markets would obviate that resource.  Summing up his experience, he said, “I used to think that successful people and companies were about big ideas; I’ve learned that instead it is about figuring out what you do better than anyone else, then getting up each morning and putting one foot in front of the other do it.  It’s when you get bored that you get into trouble.”

We celebrated Equinox in the vineyards 21 days ago and it is starting to look and feel like Spring.  Equinox is the day when the hours of daylight equal the hours of darkness.  Because the Earth tilts, the days grow longer after Winter Solstice but the quickening change and the longer days become undeniable and exciting after Equinox.  The cherries have been blooming for a week now and the daffodils, too.  The old-timers used to gauge the blossoming of the vines by the cherry blossom.  We’ll see.  Tulips are starting to show their vibrant colors and there is a buzz of activity when the sun comes out.  Deciduous trees are starting to take the edge off of what has been a long grey winter with all their fresh green shoots. 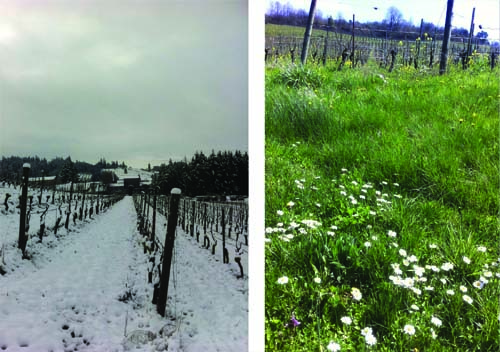 It is a bee’s paradise  in our Biodynamically farmed estate vineyard. Just in this photo there are five plant species flowering, all providing them with nectar and pollen. The white flowers are English daisies (Bellis perennis,) the purple flower in the left hand corner is Red Dead Nettle (Lamium purpureum)and just beyond the English daisies are Dandelions (Taraxacum officinale), Cat’s-ear (Hypochaeris radicata) and Field Mustard (Brassica campestris). When I walked up to the first stand of Field Mustard, I noticed there was a bumble bee, a honey bee and a mason bee all within a yard of each other. That’s cool!
All of these plant species I identified using the book Northwest Weeds: the Ugly and Beautiful Villains of Fields, Gardens and Roadsides by Ronald J. Taylor. It’s a nice simple book that catalogs most of the common weeds in the Pacific Northwest. These plants are found in a book about weeds  but to me they aren’t weeds. To me, these plants play an important role in the farm’s ecosystem.  They add biodiversity, provide habitat and a food source for a wide range of organisms. They also help reduce compaction from machinery,  prevent erosion and help keep the soil healthy. In summary, it’s good to remember how important plants are to us and what they do for the environment. Next time you get out your hoe or your herbicide have another think about why you’re trying to kill that plant. It could be doing you a favor but you’ve just never realized it.