Our rules suck: What should we do about American labeling laws?

The laws governing the making, selling, labeling and manipulating of wine in the US read like stereo instructions translated from the Dead Sea Scrolls into the Wookiee language of Shyriiwook and then into American English. You can find them here. The sad part about them is that they basically boil down to a very scant few loose rules about what you can and cannot do, but sometimes can anyway if you feel like it or if no one is looking. There's a lot of text there, but the main threads with respect to grape-based wines are these:

I know that when buying certain foods there is an assumption that it’s not 100% that specific thing, but 75%?!  These rules were/ are likely designed to give the American farmer a better chance of being successful, and I respect that. But go to Napa Valley and look at the excesses all over the place. Explain to me how adding 25% Ruby Cabernet or Alicante Bouchet to your Cabernet Sauvignon does anything other than extend your yield and lower your overhead, and buying you another Maybach for your armada.

Here's an idea: let’s get together and classify the AVA's according to variety, like the French do, and create real standards for quality. Sure, it’ll be confusing for some, but it will also make the wine industry criteria valid. The county, regional and state appellations can remain under the current system, but the AVA's will have significance beyond some broad suggestion of what the wine might be.

And if they don't like it, they can call it California Red Wine and make it however they like. Until then, our system doesn't have any authority or credibility. Sure, Americans like varietal labeling, but we also expect it to mean something, don't we?

I agree with the assessment that we need a stricter set of rules, but not to the level that you're proposing. I've always liked the idea that we exist outside of the stringent rules like those that France imposes.

The rules as you propose them don’t allow for the best part about our current leniency: artistic license. Going from nothing to everything will upset the balance to a staggering degree. Consider France and Italy. France has been doing the same thing for centuries, yet has only been making wine under the current wine law since 1935. Their regions were tried, tested, marketed and set. They knew where to grow Chardonnay, Pinot Noir, Merlot, Cabernet, etc. through decades of trial and error. Placing rules around these was for marketing purposes and an afterthought as far as regulations are concerned. They were already doing it that way, in order to market what they were doing to other nations, they slapped a strict-looking label on the bottle and away they went.

Italy, on the other hand, has only been a country since 1856. They were growing grapes willy-nilly on every available surface then and they're still doing that now. They had no rhyme or reason to their wine program until 1963, when, in an attempt to achieve the success enjoyed by France, they mirrored France’s wine laws and, in my opinion, jumped the gun on regulations – same as you are suggesting we do now. They still don't have their business together to a degree that they will anytime soon be enjoying the wine marketing success of France, and some of their most successful wines have actually had to secede from the DOC union in order to thrive both from a quality perspective and a marketing perspective. Too much, too soon.

Our wine program has really only been growing since 1933, when we repealed Prohibition. Since then, we’re advancing at a rapid rate, but are still discovering exciting new wine regions and determining which varieties grow best in them. I agree wholeheartedly with your call for accountability, but are you really telling me that Merlot is just off the program in Napa? That’s a shame. I think that a better plan for us is to start small. My take:

Biodynamic farming is complex, sometimes hard to explain and sometimes hard to quantify. It involves many areas: preparations, compost, biodiversity and an awareness of the rhythms happening all around us.  I want to talk a little about using a Biodynamic calendar and the intention behind our practices during certain periods on the calendar by highlighting the thoughts of Rudolf Steiner and all those who have continued what he started. The biggest thing to understand is that we believe the moon has an influence on animals, plants and the activities we perform on the farm.

We all follow the sun over the course of the day: it rises in the east, reaches its peak at midday then descends to the west. In summer, the sun’s arch is much higher than it is in winter. In the northern hemisphere, the arch gets progressively higher every day from December 21st (winter solstice) until it reaches its highest arch on June 21st (summer solstice) from then on the arch slowly lowers again. We call this cycle one year and it coincides with the earth doing a full rotation of the sun. When the sun slowly gains height in the sky, we experience spring and then summer.  When the sun begins to descend, we experience autumn and winter. During spring and summer, the earth ‘breathes out.’  Plants focus their energy on new growth and reproduction. In fall and winter, the earth ‘breathes in’ and plants refocus their energy towards the soil mostly on root development and storing energy in these organs until the cycle starts again. 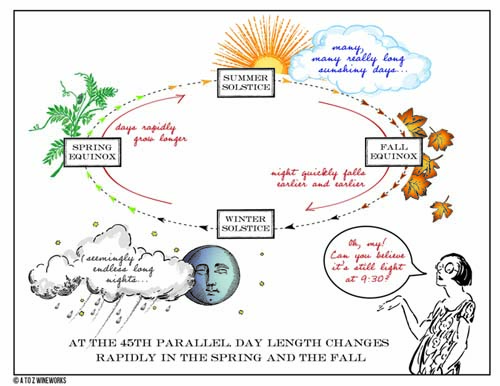 Dear Pinot Noir and Chocolate: I Hate You

I'm not sure who to blame for this. Probably Hallmark for their insistence in sissifying February 14th into the willowy, cream-puffed doily that it has become, perpetuating the notion that chocolate, pink stuff, tulle and a dozen roses is everyone's idea of romance. I disrespectfully disagree. In wine country, at least here in Oregon, there is an obsession with pairing Pinot Noir and chocolate when Valentine's Day rolls around. It seems that every tasting room in the Willamette Valley is hawking some craft chocolatier's nibblies with their wine if they aren't obsessing over bacon, or bacon and chocolate or, worse yet, chocolate infused wine. I'm going to go out on a limb here and just say it, Pinot Noir and chocolate sucks. It sucks because of how silly everyone looks gushing over it. It sucks because that wad of crappy milk chocolate is disrespectful to the wine. It sucks because that crappy wine is disrespectful to the delicious chocolate. Chocolate is not a magic ingredient. It does not make celery better, or clam chowder, or sitting in a hot tub. It is not as cool as duct tape. At best, combining wine and chocolate is a gateway pairing, hopefully leading one to learn and do more with their energies. At worst it is lazy, boring, and, frankly, just awful. It isn't romantic, really, and could lead to a pretty weird night, but the better pairing is Pinot Noir and mushrooms. Brown stuff. Dirt. Fungi. True love.

I'm going to have to disagree with your chocolate and hot tub assessment. Other than that, I concur. The chocolate and Pinot Noir pairing has been a pet peeve of mine for many years. I've grown weary of explaining how these two don't taste good together, and from the incredulous looks on people's faces, they don’t believe me regardless of how passionate my explanation. So, instead of talking people out of the Pinot Noir and chocolate pairing, I’m going to talk them into the right pairings. I am hardly ever without chocolate close at hand (no less than three different bags of chocolate sit in my desk drawer at this very moment), so have amassed an arsenal of pairings that once tried will make you never want to reach for Pinot Noir and chocolate in the same sitting again.

My absolute favorite chocolate pairing is Banyuls, a full-bodied sweet red wine from France, but it’s admittedly hard to find. Easier to find and oh-so-appropriate for Valentine's Day is the sexy, delicious combo of Brut Champagne and milk chocolate. I've reached for coffee, Port, Madeira, Sherry, Armagnac and even a cold Guinness to accompany my chocolate cravings. I’ve had some success pairing chocolate with certain Zinfandels and Cabernet Sauvignons, and my favorite accidental discovery was how stunning chocolate is with Mezcal (the higher end stuff, people, not the worm-in-bottom kind).

So please, Valentine's Day revelers, try these suggestions with your chocolate next time. Enjoy them, love them, adopt them as your own, and leave the Pinot Noir for better pairings – yes, like mushrooms.