The Silicon Valley Bank State of the Industry Survey: How Reliable are its Responses?

Too often, desired conclusions skew analysis to produce self-fulfilling results.  While keeping faulty data from contributing to sampling error is simply a matter of objectivity and basic arithmetic, more subtle are the subjective factors that yield non-random samples.  In the case of the Silicon Valley survey, the psychological disposition of the respondents is a significant distorting factor.

At the February Oregon Wine Symposium in Portland, Silicon Valley Bank principal, Rob McMillan, gave a preview of the bank’s 2012 State of the Industry Report, projecting Oregon industry growth of between 7% and 11%.

In presenting his data, Rob noted that 80 of some 400 Oregon wineries had responded.  This corresponds to a confidence level of 95% (a generally standard target for researchers) with a confidence interval of plus or minus 10%.  Thus, with 80 of 400 wineries reporting, if the sample were random, there is a 95% certainty that the range of growth will be between -1% and 19% (plus or minus 10% against the reported average of 9%.  This describes industry conditions ranging from stagnation to boomy growth, random indeed.

Adding to the uncertainty is the definition of sales growth.  Is one speaking of unit growth or revenue growth?  Unit growth may well be accompanied by a drop in revenue (“We lose a dollar on every sale but we make it up on the volume.”)  Or, the data may just be GIGO (Garbage In / Garbage Out) as with the 2011 Oregon Winery and Vineyard Report covering 2010.

If one’s winery is failing, it is highly unlikely that receiving a business conditions survey in the mail is going to be very appealing.  Who would want to be reminded, question by question, of how bad things are?  Even those making ends meet don’t particularly want to see what others are presumably doing at the top of the scale.  Rather, surveys such as Silicon Valley’s tend to be overly optimistic as, even anonymously, people want the world to know how well they are doing.  Moreover, as the Silicon Valley survey gives the option of identifying one’s winery, there is even more incentive for the haves to trumpet their success.

Sociology also plays a role in sample error.  Electoral surveys that are as statistically well-constructed as possible have two inherent sociological flaws.  First, opinionated people are more likely to pick up a telemarketing call during dinner and thus don’t necessarily represent the deliberating voter.  Second, as the preponderance of calls go to land lines, the results are slanted to an older, more traditional demographic.

Similarly, surveys of customer satisfaction are more likely to be completed by people either very happy or unhappy with their purchases.  In the case of fashion or durable goods purchases such as automobiles, buyers may rationally cite the reasons for their decision but, in the end, people buy to satisfy the complex Gestalt of ego.

Survey responses tend to attract a non-random sample by their very nature: those who perceive something to gain by responding, those more desirous of having their opinion heard or those inclined to boast of their success or distinguish a particular prowess.  These factors coupled with conclusion driven analysis and poor sampling methods yield only a superficial view, like the 50 mile setting on a car’s GPS, a level of detail anyone familiar with a map of the United States already knows but doesn’t provide sufficient direction for where one wants to go.

A recent article in the Wine Spectator suggested that small wineries are better than large wineries, for a variety of reasons. "Big wineries are all about predictability," the article proffers, while small wineries are catering to a shift in American wine consumer habits that demands an esoteric or unusual experience in every glass. "Today, if you want to experience a wine that is at all different from anything that might be understood as 'mainstream,' you have to drink 'small'", the article asserts. I agree. But most Americans are still totally confused, intimidated, and put off by the minutiae of the wine world and seek something they can rely on. Sure, the sommelier in the nappy suit and bow tie has seen it all already and demands the weirdest, most obscure variety aged in petrified goat viscera and made in a 13th century artisanal style. Gary from accounting, on the other hand, just wants a wine that doesn't taste like petrified goat viscera and/ or cost the better part of his paycheck.  In other words, Gary likes a predictable wine that looks good, smells good, tastes good, and occasionally makes him feel better about his meaningless life. Gary isn’t crouching behind a row of shrubs looking for the smallest producer of Bourboulenc in the Shire. Gary lives in Pickaway County, Ohio and hasn’t even heard of the Scholium Project, or Bonny Doon, or even Byron. Gary can find the big brands at his Buehler Food Market on the way home from work. I’m okay with Gary. Most people are Gary. Better a critter wine than a can of Bud and an hour of "Dance Moms". Maybe one day he will go to California and try something that really piques his interest from a picayune producer of 100 cases and join the wine club. I doubt it, though.

It does seem that many of today's wine writers write for the niche market, rather than the Gary's of the world, doesn't it? Why not simply accept that there is a market for both, instead of pretentiously proclaiming the obscure stuff 'better'? The small-production winery will thrive because there is a large enough percentage of the wine drinking population who seeks out the new and obscure, and the larger producers will thrive because of Gary's desire for consistency. Like you're saying, the big guys act as a gateway to the little producers. How do we think that we got to the 'shift in American wine consumption', anyway, but for the bigger producers and their now-maligned "predictability?" Further alienating an already timid customer by making him feel idiotic for loving Chateau Ste. Michelle Riesling sends the wrong message, and creates an ever-widening gap between the geeks and the novices. It’s still wine he's drinking, after all. Far better to say, yes, this is good and consistent and a great value, but also this smaller thing is cool too, rather than separating them into 'good' and 'bad' categories, which the use of the term "better" does.

As wine writers, we would do well to remember our own humble wine beginnings. We all started somewhere, and I highly doubt that the wine writer at Spectator you speak of was weaned on grower Champagne and Williams Selyem Pinot Noir.

What most of us may not notice is that like the sun, the moon has a similar pattern when traveling through the night sky. The difference between the sun and the moon is that the moon’s cycle is only 27.3 days instead of one year. When the moon is progressively getting higher in the sky, we say the moon is ‘ascending’ and when it is getting lower in the sky we call this ‘descending.’ We believe these rhythms are akin to the seasons. For example, the ascending period is like spring & summer and the descending is like fall & winter. During the ascending period, we believe there is a subtle shift of the energy to what is above the ground. During the descending period, the energy is shifted inward to the soil and roots. By altering certain practices to work with these lunar rhythms, we are trying to work with the rhythms of life and reinforce these rhythms to the organisms on the farm.

Some examples of how we work in the vineyard with these rhythms are:
Descending moon  (energy directed inward to soil and roots)
1.    Pruning  the vines
2.    Planting dormant vines
3.    Making and spreading compost
4.    Cultivating
5.    Spraying preparation 500 and barrel compost*
Ascending moon (energy directed above the ground)
1.    Spraying preparation 501*
2.    Harvesting fruits, vegetables and flowers
3.    Sowing seeds – Although germination happens below the ground, there is an upward striving in the plant 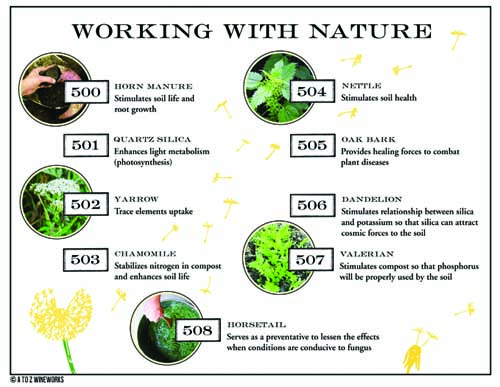